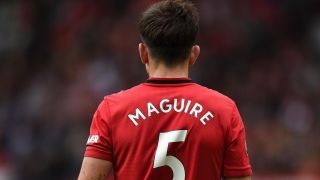 Harry Maguire made the biggest move of his career this summer by joining Manchester United.

The 26-year-old was part of a season-long saga after being initially linked with a move to Old Trafford a year ago.

Maguire spoke of his excitement when the deal was announced, two weeks ago. It had been a long time coming with plenty of speculation.

“It’s a really proud moment for myself to join such a big club,” he said, as quoted by the Manchester Evening News. “You always dream of walking out at Wembley and Old Trafford they’re the two big stadiums when you’re a kid.

“An amazing club, it’s a club I always watched and looked up to when I was younger. Now I’m part of it. The atmosphere in the stadium itself is so unique and something so special.”

While Maguire is still some way off the quality of Liverpool’s Virgil van Dijk, he has been seen as one of the best centre-backs in the Premier League for the past few years.

And United weren’t the only club trying to sign him from Leicester City this summer.

Manchester City manager Pep Guardiola has always been a fan of the England international – and knows he’d be a upgrade on John Stones.

Speaking to the press after City beat Liverpool in the Community Shield, Guardiola revealed the Premier League champions were priced out of a deal for the defender.

“He’s an excellent, top-class defender” the former Barcelona and Bayern Munich boss said, as per BBC Sport. “We were interested but could not afford it. United could afford it.”

That said, according to the Daily Star, City made a huge offer to sign Maguire before he joined United.

They claim City offered £278,000-per-week to Maguire in a deal that would make him the highest paid defender in world football, which shows how much they rate the centre-back after losing Vincent Kompany.

Maguire said no and instead accepted a £190-per-week offer from the Red Devils instead.

Guardiola congratulated United for getting Maguire.

“He had an incredible World Cup. He’s strong in the air, good with the ball and builds it up, he’s so fast. He’s young. Congratulations to United.”

Maguire got his United career off to a flying start last weekend in the 4-0 win over Chelsea. He picked up the man of the match award and helped United keep a clean sheet.

Last season, the Reds only managed two clean sheets in the Premier League. We’re halfway to that point after the opening weekend of the 2019/20 season.