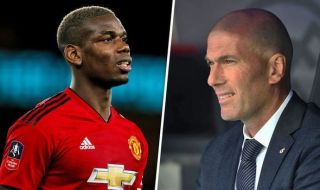 Real Madrid manager Zinedine Zidane has spoken about Paul Pogba, who has been heavily linked with a move to the La Liga giants this summer.

As quoted by well-respected Italian journalist Fabrizio Romano, Zidane said he is happy with his current squad, and must respect the fact that Pogba remains a Manchester United player.

Despite suggesting he wants to move away to seek a new challenge earlier this summer, Pogba still remains a crucial part of Ole Gunnar Solskjaer’s midfield plans.

The Frenchman was the driving force in the second-half against Chelsea on Sunday as the Reds compiled misery with two late goals, both assisted by Pogba.

Zinedine Zidane: “Paul Pogba is a Manchester United player and we must respect this. I’m happy with my players”. 🛑 #MUFC #RealMadrid #transfers

NEXT:Why Man Utd stars have been banned from signing autographs near training ground

United didn’t sign a midfielder this summer in the anticipation Pogba was going to leave the club, despite the European transfer window shutting on September 2.

The Reds simply could not afford to let the World Cup winner leave without bringing in a replacement, so it looks increasingly likely he will stay at the club beyond the European window.

Some United fans have reacted to Zidane’s comments on social media:

It's not optional, it's a must to respect Pogba and respect the biggest club in the world atm #MUFC