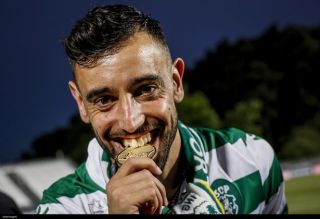 A lot was reported over the summer regarding Sporting Lisbon playmaker Bruno Fernandes, including interest from Premier League trio Manchester United, Liverpool and Tottenham Hotspur.

But according to ESPN’s Rob Dawson, United dropped their pursuit of the Portugal international because they felt he loses possession too much, proving to be the wrong candidate to strengthen Ole Gunnar Solskjaer’s side, with the Norwegian coach wanting to play a possession-based style of football.

Ironically, this observation comes a year after United spent £52m on Fred, who still seems miles away from a starting place despite many being critical of the team’s midfield going into the 2019/20 season. The Brazilian loses the ball constantly and can’t seem capable of avoiding opposing traffic when the ball is at his feet.

Fernandes scored 31 goals for Sporting last season and was identified as a potential option to bolster Ole Gunnar Solskjaer’s midfield, but @writtenoff_mufc makes a good point that this shows United are being more careful about recruitments these days.

and a view others must share seeing as he has not found a club to join this summer (yet).

All three new signings made a positive impact in the 3-0 win over Chelsea on Sunday, which bodes well for the future. Harry Maguire was named man of the match, Aaron Wan-Bissaka was exceptional at right-back, and Daniel James scored a goal after coming on as a second-half substitute.

The European transfer window is still open and it looks like Fernandes will spend another few months at least at Sporting.

If he was that good, surely he’d have been snapped up by now. Especially when the FIFA / YouTube experts reckon Fernandes is the greatest thing since sliced pan!