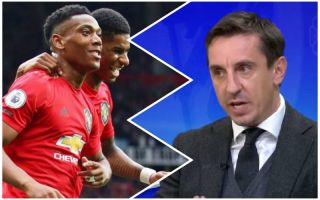 After joining United in 2015 from AS Monaco as an exciting young French prospect, Martial has not been a consistent performer for the Red Devils and even lost his place in the France squad the summer last year when Les Bleus were crowned world champions.

The Frenchman didn’t have it easy under former MUFC manager José Mourinho, who was sacked last December, but things have appeared to pick up since Ole Gunnar Solskjaer’s arrival, with the forward agreeing to fresh terms before the end of last season.

Now we need his performances to pick up and he got off to a flying start to the season with a goal in last weekend’s 4-0 win over Chelsea.

Martial played in his preferred role as a centre-forward against Frank Lampard’s side – while Marcus Rashford shifted out of the left.

Neville believes it is time Martial started delivering for the club.

“Martial has not realised his potential on the left side for three or four years,” he told the Gary Neville podcast, as quoted by The Express.

“Ole Gunnar Solskjaer is probably thinking he wants to play centre-forward, he’s a good finisher, ‘I have to give him that chance’.

“You could argue it’s to the detriment of Rashford.

“But if he can get his head around playing on the left and be comfortable and Martial can be a centre-forward then it’s worth giving him that chance.

“At Manchester United when there’s speculation around Martial leaving there’s been a big fear that he will go to another club and become one of the best players in the world because he has got that much talent.

“I think now is the time for Martial to deliver it.

“He is being given his chance as a centre-forward and scored a good goal today [Sunday].”

Next up for the Red Devils is a trip to Wolves on Monday night, when Martial will be looking to add to his tally for the reason – during which he should be aiming to score 20+ goals.