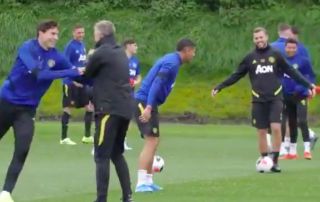 Manchester United’s players were training today ahead of the tough encounter against away to Wolves on Monday night.

The 4-0 hammering of Frank Lampard’s side at Old Trafford can only breed confidence, and let’s hope the Reds can continue their momentum at Molineux on Monday.

It was a frustrating summer transfer window for United fans as the club failed to sign a midfielder, a key area that needed addressing after Ander Herrera’s exit.

Concerns still linger that the Reds do not have enough strength in depth in the squad but for now there is a lot to be optimistic about with new signings Aaron Wan-Bissaka, Daniel James and Harry Maguire all settling in well.

The rain failed to dampen the lads' spirits on a wet Wednesday in Manchester! 🏃‍♂️🏃‍♂️ #MUFC pic.twitter.com/rPf8sgSkci