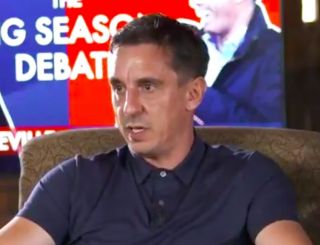 Gary Neville took part in an interesting debate with fans ahead of the new season.

The former United right-back was challenged on whether the Glazers have invested enough into the squad, in order to reduce the widening gap between the Reds and Man City and Liverpool at the top of the league.

United made three exciting signings this summer in Aaron Wan-Bissaka, Harry Maguire, and Daniel James; each of whom made impressive starts to their Old Trafford career as Ole Gunnar Solskjaer’s side thrashed Chelsea.

However, what was most concerning for fans about the summer transfer window was the lack of midfield additions.

The club knew about Ander Herrera’s departure in May but yet still did not sign a replacement, leaving the squad light in midfield options.

An attacking replacement was also not signed for Romelu Lukaku who left on deadline day, meaning the Reds were left without a proven goalscorer.

However, Neville says he is not concerned about the current situation and explains how good decisions will soon change things at Old Trafford.

"We're not going to change the owners by social media." @GNev2 weighs in on the Glazer debate and tells @AdamMcKola why he's not panicking about United's current situation. #MUFC