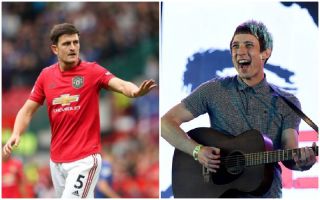 Harry Maguire made his Manchester United debut on Sunday and fans are already singing his name, but the England international deserves a better song than his current La Bamba tribute.

And now a group of United fans have gone viral after adapting one of Gerry Cinnamon’s most-popular tracks.

A video was shared on Twitter featuring a group of Reds in Cape Verde singing a chant about Maguire to the tune of the Scottish singer-songwriter’s Belter anthem.

The chant goes: “Harry Maguire/Different from the rest/ Big slab-head from Sheffield/ He’s come to join the best/ He is the answer/ United’s no 5 at the back/ He’ll leave no striker alive/ Harry Maguire!”

The #XSEveningShow would like to officially endorse this Harry Maguire chant to the tune of @GerryCinnamon “Belter”.

A fan reached out to the singer on Twitter asking what he thinks of the rendition, but Cinnamon has yet to reply or give his thoughts.

Journalism student at the University of Salford, @Benjaminjamin, is taking responsibility for coming up with the chant. Do you think it will be a hit on the terraces this season?

Time will tell if it will be sung on the Stretford End, but the video shows a good few fans enjoying themselves and chipping in with a good old fashioned sing song.