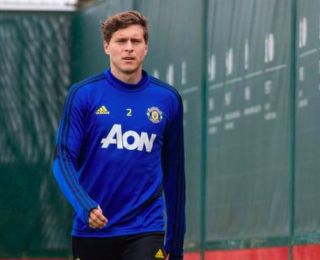 Victor Lindelof has become a fan favourite at Manchester United.

The Swedish centre-back has improved drastically since his arrival from Benfica and was the club’s best defender last season.

New signing Harry Maguire can only help develop the 25-year-old into a better player, and signs are promising that a formidable partnership could be blossoming between them.

The pair complimented each other well as the Ole Gunnar Solskjaer’s side kept a clean sheet during 4-0 hammering of Chelsea on Sunday.

And there’s a positive update for fans tonight, as reports suggest that Lindelof is about to sign a new contract extension at the club.

The defender currently has two years left on his current deal at the club, but Swedish outlet Aftonbladet claim he is ready to sign a new contract and significantly increase his £75,000-per-week contract.

There had been talk that Lindelof could be heading to Barcelona, but if these reports are to be believed then it is great to hear he has committed his long-term future to the club.

Check out some United fans reaction to Lindelof’s contract update:

He should be captain, not De Gea that probably will leave next summer for free.

The Lindelof-Maguire partnership is here to stay and I'm all for it. https://t.co/H9p6XYXWXS

Lindelof is quality👍Him and Maguire only had a few days training together and they were absolutely class, Almost as if they'd been alongside each other for years, I like both of them, Watching a united team look so comfortable playing out from the back was great to see

Need to tie Lindelof down to a long term contract. Hes a top lad and a quality centre half. Can see him and Maguire striking up a great partnership which has the potential to go on for some time yet. #MUFC

Lindelof has grown on me over the last two years but I don’t agree with just chucking big contacts at players because their form is decent.. especially when they’re easily replaceable ability wise..

Hearing about a possible contract extension for Lindelof, i would be buzzing to get him on a new deal. Although his first season was very difficult, i think he's proved to us in the last year that he can be a key part of our future and real leader.