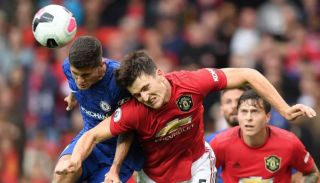 It was an all too familiar sight for Manchester United fans at Old Trafford on Sunday. Defensive error followed defensive error leading to goals that should never have been conceded. Only this time it was different, it wasn’t United, but opponents Chelsea, who made the errors, Chelsea who conceded silly penalties and soft goals. United, by contrast looked, for the most part, calm and assured, barely a hint of panic. There was the odd hairy moment but that’s to be expected from a back four playing together for the first time. But for first time in six years United might have a back four they can depend on.

If this game had been last season United would have gone in with Ashley Young at right-back instead of Aaron Wan-Bissaka and Chris Smalling or Phil Jones at centre-back instead of Harry Maguire. Had they done say it could well have been a different story. The new boys looked calm, assured, almost buoyed by their new surroundings. It had been their dream to put on the United shirt and it showed. The pair of them looked calm and assured, everything we haven’t seen from the old guard. Smalling, Jones, Rojo, Bailly. All have tried, none have been up to the job. It looked like Lindelof might go the same way, but after taking some time to acclimatise, he looks more like the defender we thought we were getting.

Let’s start with Maguire. He slotted in seamlessly and the effect was immediate. His impact showed as he outmuscled Tammy Abraham on the edge of his own box before setting in motion the move that would result in Anthony Martial putting the Reds 2-0 up. With the tried and failed options of Smalling, Jones or Rojo the more likely outcome was Abraham getting away to get a chance on goal. But it doesn’t stop there. Maguire is like a magnet to the ball, a target for every set piece delivery and first to practically every ball sent into his own box. He was able to step forward and anticipate danger taking the ball before danger could develop. This is definitely not something you see from Tweedledumb and Tweedledumber (Smalling and Jones) who prefer to wait until the danger is right on top of them before they take action.

In short, in just one game, Maguire showed exactly why Ole wanted him and why United were prepared to make him the most expensive defender in history. Capable of sensing danger, starting attacks and commanding his own box, he’s the type of defender United have been lacking for years. It’s early days for the partnership and there was still some issues as we saw, but if both can stay fit, by Christmas time, we could have the makings of a fine partnership.

So now let’s turn our attention to Wan-Bissaka. Ever since the Dutchman and his philosophy saw fit to dispense with Rafael (how we still miss him) United have mostly had to make do with converted wingers for right-backs, barring a brief spell when it looked like Matteo Darmian was going to be the answer. First Antonio Valencia, then Ashley Young, this, coupled with our lack of as right-winger and Chris Smalling as our right-sided centre-back meant that United’s right flank was simply a disaster zone. Time and time again we watched Valencia either smash a cross into the shins of his opposition full back or else come inside, get lost, do some sort of weird rain dance on the spot and lay it off short.

After that came Ashley Young. The idea seemed great, he’s right footed and he can cross. The practice proved a lot different. Young was a converted left winger, much more used to coming inside to cross, not going on the outside. He also proved woefully inadequate defensively, often caught out of position and, when sat deep, his first though was to either loft it away or try and turn. Both routes usually let to United being put under pressure.

Enter Wan-Bissaka. Sweeping into the United right-back slot like an RKO out of nowhere, ‘Spider’ was everywhere, rampaging forward to support the attacks, using his searing pace and long legs to get tackles in well before a move became dangerous and his positional sense to stop crosses on the rare occasions he was beaten Wan-Bissaka looked like he has been at United for years.

He looked unfazed by his surroundings, the occasion, opponent or setting, casually halting almost every Chelsea attack that came down his flank like a one-man right wing (which the United right-back has been for some time now). With him around and Diogo Dalot to back him up, United’s right back slot looks settled for the next decade. What’s more because of these attributes it placed far less pressure on holding midfielder (in this case, Scott McTominay) to come across and cover, or to fill in at centre-half whilst Lindelof covered. This meant McTominay was free to try and protect the back four as well as set moves going (there was even time for a pirouette).

It may have been just one game and there was still the odd moment which showed it’s still a work in progress but with the two new additions, coupled with the exile of Nemanja Matic, whose decline has been remarkable, United finally look like they have a functioning defence and no one could be happier about it then me, except maybe David de Gea.