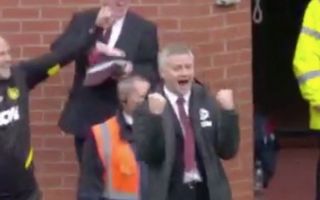 Everyone looked happy on Sunday as Manchester United thrashed Chelsea 4-0 at Old Trafford. Not just over the win, but there seemed to be sense of togetherness about the players. It’s early days but let’s enjoy it while we can.

One man who really enjoyed the action was United boss Ole Gunnar Solskjaer.

As seen below in the video, he couldn’t get enough of Marcus Rashford’s second goal against Frank Lampard’s side.

It came from a beautiful through ball by Paul Pogba, acting like a world-class quarterback you’d see in the NFL, with Rashford running on to it before putting the sword an extra inch into Chelsea.

Solskjaer not only gives a few fist-bumps, he turns to his assistant manager Mike Phelan and shares a moment of glee.

Rashford got the season off to a great start with two goals, so he’s quickly come to terms with being United’s main man up front after selling Romelu Lukaku to Serie A giants Juventus.

This season we will be needing 20+ league goals from Rashford.