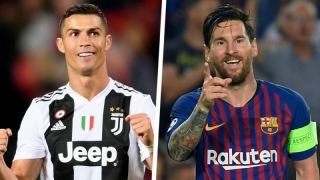 Manchester United legend Cristiano Ronaldo has identified the difference between himself and Lionel Messi.

I always thought the term ‘rival’ is overused when it comes to Ronaldo and Messi, both whom are considered the best footballers in the world, mainly because there never seems to be any beef between the pair.

The so-called rivalry stems from the media and pre-match build-ups from the years they shared in La Liga, and you’d have to say Ronaldo’s move from Real Madrid to Juventus last summer came as a blow for Spanish football (certainly for Los Blancos who endured an underwhelming season in 2018/19).

Rather than argue over who is best, I’ve found it is best to just appreciate both while we are lucky enough to experience them during their playing days because they don’t last forever.

But Ronnie has spoken out about the differences he sees with himself and the Barcelona star, as quoted by the Manchester Evening News.

“The difference with Messi is that I played for several clubs and won the Champions League with different clubs,” said Ronaldo.

“Messi is an excellent player who will be remembered not just for his Ballon d’Or wins, but also for having improved – like me – year after year.

“I wake up every morning with the idea in my head of training with the objective of achieving something more, not just to earn money.

“Thank God, I don’t lack money, so what I want to earn is a place in the history of football.”

We’ll be talking about Ronaldo and Messi for the rest of our days. Their places are, without question, booked in the history of football.