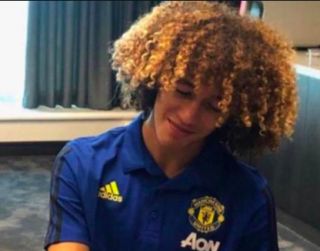 The 16-year-old star is regarded as one of the best young talents in French football and has made eight appearances for France’s u16 national side.

According to ESPN journalist Rob Dawson, the Reds will pay £9,4m for Mejbri, a sizeable fee for a player given his age, perhaps demonstrating just how highly-rated he is by scouts at Old Trafford.

When granted clearance, Mejbri will  join up with Neil Ryan’s u18 side, but is already looking ahead to break into Ole Gunnar Solskjaer’s first-team set-up.

NEXT:Gary Neville explains what he loved most about Harry Maguire against Chelsea

“Initially, I am going to join up with the U18s,” the youngster told Le Parisien.

“If I am able to get into the 1st team in two years time, that would be great. Aside from that, everything depends on me.

“Physically, I am going to have to improve somewhat. I do not yet know how my body is going to evolve. If I have to turn my attention to that side of things, I will, but without losing my technical ability and my on-pitch vision.”

Speaking about players he wants to follow in the footsteps for the Reds, Mejbri told Le Parisien: “There is of course Pogba. In terms of the older ones, Ronaldo,  Beckham and Cantona. When I went to Manchester, all that people would talk to me about was him.”

“Over there, he is considered a king, whilst in France, he does not possess the same aura.”

Mejbri clearly has a bright future at Old Trafford and has set ambitions plans for his United career. We are excited to follow the starlet’s development in the u18 side this season, and perhaps eventually progressing into Quinton Fortune and Neil Wood’s u23 side.