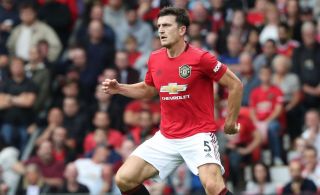 The new signing made an immediate impact on his Old Trafford debut, contributing to United’s clean sheet in the 4-0 rout against Frank Lampard’s side.

Question marks have been raised over Maguire’s price tag since his move from Leicester, but he proved his importance to Ole Gunnar Solskjaer’s set-up yesterday.

Sky Sports gave Maguire the man of the match award, which is hard to argue against as he barely put a foot wrong.

Other new signings Aaron Wan-Bissaka and Daniel James also made great starts to life at the club; Wan-Bissaka looked solid at the back and James came on to score his dream debut goal from the substitutes bench.

However, Gary Neville noted Maguire’s performance, crediting his serenity in defence and composure in possession.

The 26-year-old is already forming a promising partnership with Victor Lindelof in defence.

See Neville’s thoughts on the England international’s efforts in his tweet below:

I loved Maguire yesterday . Top CB’s don’t sweat , look calm , don’t spend time on their backsides, win headers,are composed on the ball, cover others and lead by example. It’s only early but he demonstrated all those qualities. No sign of the price tag or OT phasing him either!