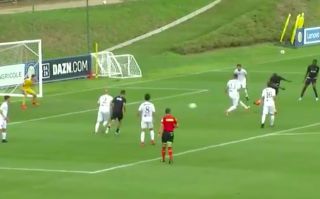 Romelu Lukaku has made a great start to life at Inter Milan – he scored four goals as the Serie A side thrashed Virtus Bergamo 8-0 in a pre-season friendly.

Lukaku’s goals may be missed at Old Trafford but United got a good deal for the player that didn’t suit Ole Gunnar Solskjaer’s fluid attacking approach.

Inter signed the 26-year-old on a five-year deal and he looks destined to score an abundance of goals for the Nerazzurri this season.

Anthony Martial and Marcus Rashford were both on the scoresheet which will give them confidence going forward. With a lack of out-and-out goalscoring options, the pair will be heavily relied upon to deliver in front of goal this season and they’ve made the perfect start.

📹 | HIGHLIGHTS#Lukaku nets four in his first appearance for the Nerazzurri ⚽⚽⚽⚽

Watch the highlights from our 8-0 win against Virtus Bergamo 💪#ForzaInter ⚫️🔵 pic.twitter.com/qOelXKFfVK