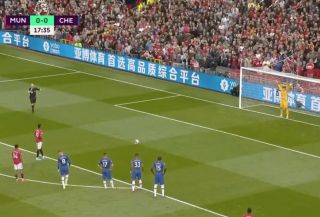 Manchester United take the lead over Chelsea thanks to a penalty from Marcus Rashford.

Referee Anthony Taylor did really well to give the penalty, approved by VAR, after playing the advantage to United when Andreas Pereira was dragged back before Rashford gets fouled inside the box after Kurt Zouma tripped him.

Rashford took the penalty brilliantly to send the ball towards the left top corner.

Hopefully we can net another before half-time and stop Chelsea from staying in touch. They’ve been the better side thus far, with the pen coming against the run of play.