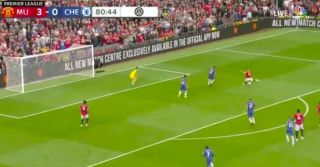 New signing Daniel James has come off the bench to score Manchester United’s fourth against Chelsea.

The Welsh winger made an immediate impact, converting Paul Pogba’s pass into the bottom corner via a deflection after the Frenchman made a brilliant driving run into the opposition final third.

It’s the dream start for the former Swansea man who replaced Andreas Pereira off the bench.

NEXT:(Watch) Martial and Rashford score to put Man Utd out of sight against Chelsea

James scored after Marcus Rashford and Anthony Martial put United out of sight with goals within a minute.

In truth, the scoreline flatters Ole Gunnar Solskjaer’s side but there has been a significant improvement in the second-half and the Reds look much fitter than they did last season under Jose Mourinho.

See James make it four below: