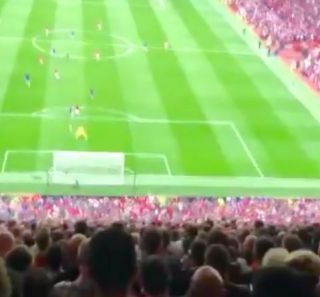 This is an absolutely brilliant video from the Stretford End.

Manchester United fans had just started a loud rendition of the Anthony Martial chant after the Frenchman doubled the Reds’ lead against Chelsea at Old Trafford.

But before the Stretford End could even finish singing ‘Tony Martial scores again!’, Paul Pogba had played a perfectly weighted through ball to Marcus Rashford’ leaving him in on goal.

Rashford kept his composure to bring the ball down and slot the ball home, causing rapturous scenes at Old Trafford.

The 4-0 victory over Frank Lampard’s side was the perfect way to start the season and breed positivity after a frustrating summer for fans.

Let’s hope we see more scenes like this in the coming weeks as Solskjaer looks to build on the opening performance.

There’s still plenty to work on for United, who rode their luck at times in the first-half with Tammy Abraham and Emerson both striking the woodwork.

The Reds face Wolves away next Monday night which promises to be another tough examination of Solskjaer’s men.

See the brilliant video captured by a United fan below: