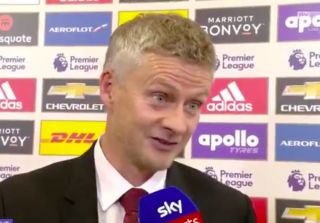 The Norwegian admitted United rode their luck in the first-half, noting Tammy Abraham and Emerson both hitting the post as Frank Lampard’s side looked dangerous in the early stages.

But the Reds blitzed their opponents in the second-half, scoring three goals in quick succession to make the score-line emphatic.

The amount of space in midfield was concerning in the first-half, but United tightened up and Solskjaer will be delighted with the clean sheet.

Goals from Marcus Rashford and Anthony Martial should give confidence to the pair, who have been relied upon to convert the chances this season for the Reds.

James made a dream start to life at Old Trafford, slotting home United’s fourth in the final stages.

See Solskjaer’s reaction to the thrashing below:

#MUFC boss Ole Gunnar Solskjaer has his say on Maguire, Rashford, Martial and what he thought of @ManUtd's performance as a whole after the convincing result against @ChelseaFC #MUNCHE