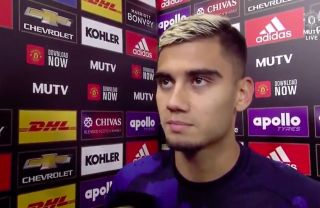 The Brazilian was handed a start by Ole Gunnar Solskjaer and made an excellent assist for Anthony Martial to double the Reds’ lead in the second-half.

It wasn’t the most of convincing displays from Pereira but he showed glimpses of what he is capable of and now has a platform to get regular starts under his belt for Solskjaer’s side.

Despite the scoreline flattering United to an extent, the Reds were clinical in front of goal amid concerns Romelu Lukaku’s goalscoring would be a loss for the club.

The pair will no doubt take confidence from their goals and will hopefully continue to deliver for the Reds this season.

It was also brilliant to see Daniel James score on his debut from the substitutes bench. It is a dream start for the Welshman and you could tell just how much it meant to him.

See his as well as Pereira’s interview for MUTV below: