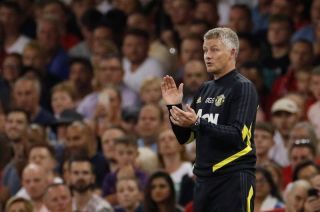 Ole Gunnar Solskjaer has already confirmed Manchester United’s youngsters will be given more opportunities this season.

The Reds failed to replace goalscorer Romelu Lukaku this summer after he made his long-awaited deadline day switch to Inter Milan.

Despite his move going down to the final day, United knew the Belgian international would be leaving Old Trafford for some time this summer so there is no reason a proven replacement cannot be brought in.

NEXT:Rio Ferdinand names midfielder he would have ‘loved’ Man Utd to sign this summer

Lukaku did not work out at United as he did not suit Solskjaer’s fluid attacking approach, but he was the only proven goalscorer at the club and his goals will undoubtedly be missed.

“For us, we’ve decided that we want to play in a certain way that I think will get players into different positions to finish, and I’m sure we’ll see more goals from the ones that we do play.

“But, as I said, they do have to take that responsibility, grab the chance, because it’s a great chance for some players to stake a claim in the team.”

Solskjaer knows that Marcus Rashford and Anthony Martial will be under pressure to score the large bulk of United’s goals this season, with the likes of Juan Mata, Paul Pogba and Jesse Lingard also chipping in.

The Reds do seem light in attack but it is a fantastic opportunity for Rashford and Martial to consistently prove they can be the goalscorer at Old Trafford.

Mason Greenwood is another exciting prospect, and fans have high hopes for him this season after some excellent pre-season performances. But at just 17, Greenwood should not have to be relied upon to dig the Reds out of trouble.

We can’t wait to see the Reds back in action today and hope Greenwood gets given the chance to make his mark against Chelsea.