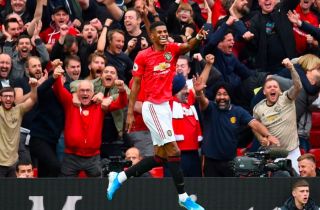 Marcus Rashford says Manchester United will only get better in attack after hammering Chelsea 4-0 at Old Trafford.

The Reds steamrolled Frank Lampard’s side in the second-half, crusing to victory with goals from Anthony Martial, Rashford and debutant Daniel James.

It had been a nervy opening half and Solskjaer’s side rode their luck at stages, but the clinical finishing display will delight the United manager.

In a new look attacking system, Rashford operated from the left-hand side, supporting Martial who was playing in his favoured central forward role.

Speaking his role on the left Rashford told Sky Sports:

“It gives us fluidity, Anthony can play both positions, it gives us more options. Defensively it can be tough but we will get better.

“Whether I’m there or more central, is the same really, just more defensive duties on the left. But as time goes on we will get better at it. It’s looking good but we’ve still got a lot to work on.”

The pair both looked dangerous going forward, and it’s a great confidence-booster that both were on the scoresheet.

It seems Martial is going to be given the chance to shine in the number 9 role this season after taking the number back from Romelu Lukaku after his departure to Inter Milan.

But Solskjaer’s structure is not rigid; an interchangeable forward line is exciting for fans and there were certainly no problems with goal-scoring today.

Rashford struck his penalty cleanly and took his second with great composure, whereas Martial got in the right-place to convert from Andreas Pereira’s cross.