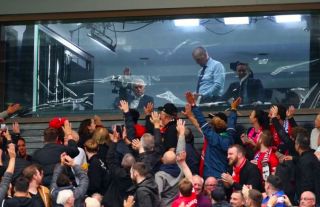 José Mourinho received a brilliant reception by Manchester United fans as he returned to Old Trafford.

The former United boss was on punditry duty for Sky Sports as he oversaw the Reds thrash Frank Lampard’s Chelsea.

There is still a clear respect for Mourinho amongst fans, despite his managerial reign at the club ending in disappointing circumstances.

It didn’t work out for the Portuguese boss at United, but fans still appreciate his efforts and he recognised their support from the punditry box.

Mourinho won the Europa League and League Cup during his stint at United, and finished second place in his second season, the highest the Reds have finished since Sir Alex Ferguson’s retirement.

He is currently awaiting his next role in management, but for now we will enjoy listening to his insightful views in his new role at Sky Sports.