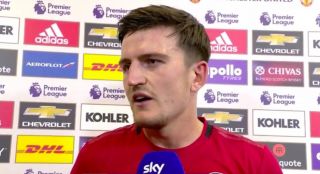 Harry Maguire was awarded Sky’s man of the match as the Reds hammered Chelsea 4-0 at Old Trafford.

It was the perfect opening result for Ole Gunnar Solskjaer’s side, who rode their luck at times.

United’s new signing showed fans what they have been missing with a commanding performance at the back. The England international showed great composure on the ball and looked an aerial threat in attack.

Maguire was thrilled with the start:

“It is a great start for myself and the team. We rode our luck a bit first half but second we were much more ourselves,” he told Sky Sports as quoted by BBC.

“It is the first game at Old Trafford so I think there were nerves. We gave the ball away in dangerous areas. We moved it nicely second half and our front three are so dangerous on the break.

“We knew there were only two clean sheets last year here. We need to make it a fortress.

“I felt good. I’ve only had three or four days with the lads. I am going to get fitter and better.”

Chelsea looked the better team in the opening stages, settling into possession and creating shooting opportunities through Mason Mount and Ross Barkley,

Young striker Tammy Abraham came inches from scoring with a thunderous effort that struck the post after being given far too much space in the box.

But United were clinical and rolled over Frank Lampard’s side in the second half with three goals in quick succession.

It’s an encouraging start for the Reds and all three debutants, Aaron Wan-Bissaka, Dan James and Maguire made impressive starts.

Solskjaer’s side will now take confidence into Monday’s tough away fixture at Wolves.