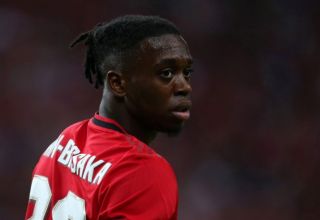 The Manchester United XI to face Chelsea later today has been leaked, as reported by Manchester Evening News.

We don’t expect Nemanja Matic’s apparent inclusion to go down well with after his pre-season performances and last season’s form, but Ole Gunnar Solskjaer will try to add experience in areas of his team against top 6 opponents.

The defence already looks miles better than it was last season and we should concede far less goals as a result.

Graeme Souness has been on Sky Sports before the game talking about not seeing where Chelsea’s goals will come from, so it will be interesting to see how they get on against United’s back four today.

The leaked line-up also suggests that Harry Maguire will make his first appearance in a United shirt. He was signed after the last pre-season game against AC Milan – which United won on penalties.

Daniel James and Aaron Wan-Bissaka will seemingly make their competitive debuts for the club too.

There’s a lot of negativity surrounding United’s hopes for the new season but a win over Frank Lampard’s men would help matters. The squad is still a case of quantity over quality but there are positives to take from the pre-season tour.

Now is the time to make optimism feel more meaningful.