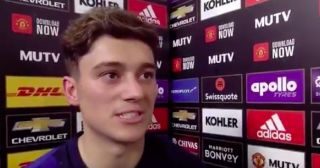 Daniel James made the perfect start to life as a Manchester United player as the Reds thrashed Frank Lampard’s Chelsea at Old Trafford.

The Welshman scored just minutes after coming off the bench; he slotted the ball beyond Kepa after Paul Pogba’s driving run from midfield.

James is already a favourite amongst the fans, and his humble comments post match are pleasing to hear.

“I don’t think you can sum up how it feels, to come on and score on my debut. I’ve dreamt of that. Ole said to be ready to come on. He said to go and enjoy yourself,” the winger told BBC Sport.

“Everything we have been doing in pre-season we have done today – high press and winning the ball back. We were keeping it well, even at 3-0 and 4-0. It sets us up well going in to next week.”

It’s clear to see James is delighted to be at United and he certainly has a bright future ahead of him.

James’ father Kevin sadly passed away just weeks before he made the move to United, and you could tell just how much the goal mean’t to him with his emotional celebration.

“Every day, I miss him,” James said as quoted by SportBible. “He always drove me on when he was here”

“There are times when I am a bit down about it but what he would say is just keep playing and working hard.

“I know he is looking down on me now.”

James has rapid pace and will become a very useful part of Ole Gunnar Solskjaer’s fluid attacking system this season; his goal today will only give him more confidence going forward.

An emotional @Daniel_James_97 talks about making his family proud on his Manchester United debut @ManUtd pic.twitter.com/g2croQHS7D