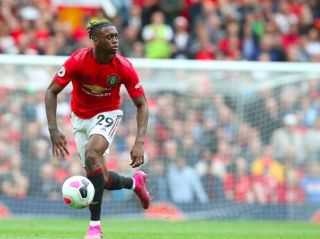 Marcus Rashford opened the scoring against the run of play, firing home a penalty after being brought down by a clumsy Kurt Zouma challenge in the box.

It’s not been plain sailing for the Reds, and Frank Lampard’s side have given us numerous scares in defence.

Tammy Abraham hit the post early on with a thunderous effort after being given too much space in the area, and Emerson flashed his effort onto the crossbar before half-time.

What’s most concerning for United fans at the break is the amount of space for Ross Barkley and Mason Mount to roam forward in through midfield.

Solskjaer’s men have rode their luck in the first-half and must improve to secure the three points.

However, one man that has impressed fans is new signing Aaron Wan-Bissaka.

The England u21 international has settled in brilliantly in his first half of football at Old Trafford, making several key interceptions and recovering tackles.

Wan-Bissaka has been almost flawless defensively but must still work on his attacking game to be a complete full-back.

The youngster’s name is already being heard sung around Old Trafford and you can already tell he is going to be a fan favourite.

Check out some reaction to the youngster’s start below:

Trying to to overreact

But genuinely think by the end of this season @awbissaka will be my favourite footballer ever.#mufc

So impressed with Wan-Bissaka. Winning almost everything, including 50/50s. Was in no man's land once or twice, but that'll improve. #MUFC #MUNCHE

Maguire and wan-bissaka have been great so far

Aaron Wan-Bissaka is worth every penny. What a first impression he’s had.

Aaron Wan-Bissaka flourishing rather than wilting on his #MUFC debut. Brilliant so far. Fans singing his name

Wan-Bissaka has been solid so far, the only shining light in an otherwise shaky and sloppy start for United.

Safe to safe Maguire and Wan-Bissaka are excellent additions to the Man U defence. Latter nearly cost his side a goal in the sequence when Emerson got the post, but he’s been pretty solid. Maguire looking quite assured as well

wan-bissaka has been immense so far ngl.