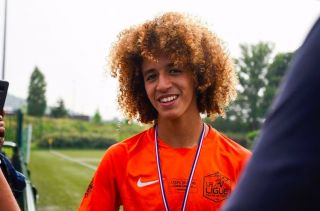 Manchester United have reached an agreement with AS Monaco for midfielder Hannibal Mejbri, subject to FIFA approval.

According to Manchester Evening News, the move will cost the Reds up to £9m for the promising starlet.

Mejbri has starred for the Ligue 1 side at UEFA Youth League level and has also featured for France’s age group national side.

NEXT:Rio Ferdinand names midfielder he would have ‘loved’ Man Utd to sign this summer

It is expected that Mejbri will continue his development at u18 level at Old Trafford and join a host of promising Man Utd youngsters.

The 16-year-old could then step up to Quinton Fortune and Neil Wood’s u23 side as he looks to eventually progress into first-team contention at the club.

Subject to FIFA clearance, Mejbri is yet another exciting talent to join the academy after the club also confirmed the signings of goalkeeper Johan Guadagno and forwards Dillon Hoogewerf and Mateo Mejia.

Solskjaer’s policy at United is to promote youth so hopefully we will see some of these youngsters make their way into the first-team in the coming years.

#MUFC have reached an agreement with Monaco for 16-year-old midfielder Hannibal Mejbri, subject to FIFA approval