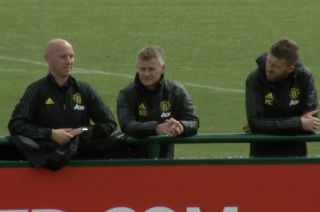 The United boss is joined by first-team coach Michael Carrick and head of first-team development Nicky Butt as the U18s look to get their season off to a winning start.

Phil Neville’s son, Harvey, is on the bench for United. He usually plays at right-back like his uncle Gary, so he might get some minutes on the pitch at some point.

Solskjaer won’t only be watching the U23s for players to take into the first-team, he will look much deeper than that to ensure the club’s academy is producing better players at all age groups.

Check out the photo below of Solskjaer, Carrick and Butt before kick-off (12:30pm):