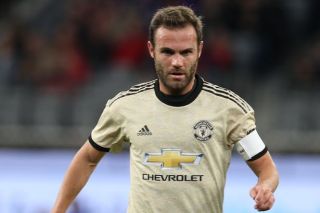 Juan Mata has vowed Manchester United will give their best on Sunday when the season kicks off against Chelsea.

The Spaniard also revealed that the Red Devils will be aggressive and pile the pressure on Chelsea’s defence from the first minute, giving an inkling into Ole Gunnar Solskjaer’s game plan.

Mata, who played for Chelsea between 2011-2014, is not a guaranteed starter but Solskjaer may go for a hint of experience in what will be a young attack consisting of Marcus Rashford, Anthony Martial and maybe Mason Greenwood.

“Hopefully it will be a good game for us,” Mata told talkSPORT, as quoted by the MEN. “We will start intense and trying to win from the first moment.

“It’s a big game, first against Chelsea at home we know how we have to start with intensity and willingness and pressing a lot and trying to score quick and as many goals as we can.

“That’s how I think we should face the season, try to demand from each other in training and in games. That’s the only way to improve and to make our fans proud. By leaving everything on the pitch.”

Mata won the Champions League with Chelsea in 2012 with their current manager, Frank Lampard, one of his team-mates on that night in Munich. They beat Bayern Munich in penalties, with Mata missing the first penalty for the Blues.

“I think it was meant to happen,” he added. “Sooner or later I thought he would be Chelsea manager because of the way he is, he’s a really nice guy and a very good team-mate and person and he knows Chelsea and is a legend there.

“It was meant to happen, he did a great season last year, it’s a very good opportunity for him and it’s very good for Chelsea. I wish him the very best, not in the game against us and when we play against them, I wish him very good.”

Mata has a big season ahead of him after signing a new contract at Old Trafford.

It’s weird that it only seems like yesterday he was greeted off a helicopter by David Moyes, about to join United from Chelsea, and yet he’s now considered one of the more experienced players at the club.

I don’t think we got the best years of Mata for a number of factors. He rarely got to play his preferred role in the hole and is often shoehorned out wide on the right, which puts United at a disadvantage now he’s looking his legs and was never a quick player anyway!

If he plays against Chelsea on Sunday, fingers crossed it’s not on the right. We should hit them with pace and have Daniel James and Mason Greenwood who could both bring that to the right flank.