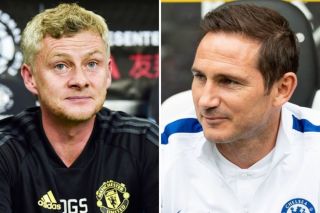 Ole Gunnar Solskjaer has been harshly criticism since being appointed manager at Manchester United, according to Chelsea head coach Frank Lampard.

The Norwegian initially stepped in as caretaker boss last summer following José Mourinho’s sacking and won 14 of his first 17 matches in charge.

But United’s form got bad after he was given the job on a permanent basis and we finished sixth in the Premier League, sitting outside the Champions League places.

Ahead of Chelsea’s opening-weekend trip to Old Trafford, Lampard insisted the criticism Solskjaer has faced is not justified.

“I am aware of it and it comes with the territory,” he said during his pre-match press conference, as per Goal. “It can be excessive, for everyone in football. I think it is possibly harsh as it is something that he came in to.

“You have to look at him this season and what he gets to do. I don’t listen too much to things.”

Chelsea are no different to United in terms of being written off for the title by many before a ball has been kicked this season. Part of that is down to losing star man Eden Hazard to Real Madrid, and their recent transfer ban hasn’t helped.

That transfer ban continues in January meaning Lampard will have to wait until next summer to add new players to his squad. He is relishing the prospect of silencing his side’s critics – starting with a win over United on Sunday to give the Blues a perfect start.

“I love playing at Old Trafford. It is a big game for both teams. We are both huge clubs that have had a lot of success.