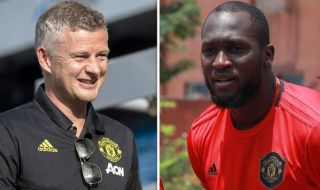 Lukaku spent two days training at Belgian side Anderlecht, having being expected to report back to United’s Carrington training ground before his move.

The striker pushed for a move all summer and United legend Gary Neville claimed his unprofessionalism was contagious in a recent tweet.

Andy he admitted he was overweight ! He is over 100kg! He’s a Manchester United player!

He will score goals and do well at Inter Milan but unprofessionalism is contagious 😷 ! 👋

However, the Norwegian claims that Lukaku left on good terms, despite a confusing ending to his Manchester United career.

“I have always had a good relationship with Rom, open and honest, we’ve spoken to each other openly and frankly and have no issue between me and Rom but we are now obviously, who’s here, we’re very happy with them.” he said as quoted by Manchester Evening News.

Solskjaer did admit that Lukaku’s goals would be a miss for the Reds this season. It’s frustrating that he was not replaced given the United boss stated earlier in the window that all outgoing players would be replaced.

However, Solskjaer remains confident his current options at Old Trafford.

“Of course Rom has a good record and stats he’s one of the top number nines around when you want to play with that kind of striker, target man,  but for me I’m very confident that we’ll get goals from Martial, Rashford, James will create, I’m sure Jesse Lingard will get more. We have a different attacking set-up this month,” he added.

Mason Greenwood is also ready to step up this season and could feature against Chelsea in the Premier League opener on Sunday.