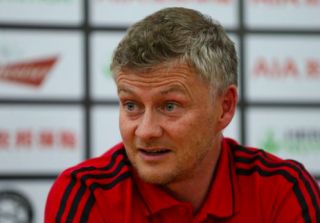 Manchester United manager Ole Gunnar Solskjaer has been speaking to the press ahead of Sunday’s eye-catching Premier League opener against Chelsea.

The Norwegian has spoken about teenage sensation Mason Greenwood, who many expect to be given Romelu Lukaku’s minutes in the side this season after no attacking replacement was signed.

The 17-year-old had an excellent pre-season campaign, and looks one of the most exciting prospects to come out of the club’s academy in recent years.

Greenwood’s classy winning goal against Inter Milan was the highlight of the tour, and Solskjaer has confirmed that the youngster will be given opportunities to replicate that this season.

As per BBC Sport journalist Simon Stone’s tweet below, Solskjaer says Greenwood will have an important role to play and expects the striker to score goals for the Reds.

We can’t wait to see the youngster in action this season and hopefully he can take his chance to become a regular starter early on.

Greenwood could feature in the Premier League opener against Chelsea at Old Trafford on Sunday.

OGS on Mason Greenwood: “Mason is going to be playing and involved a lot and when he is he's going to score goals.”