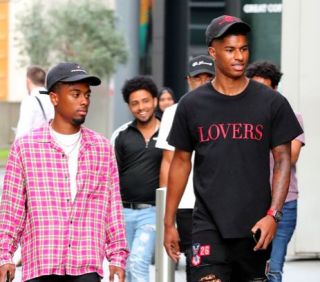 Manchester United’s players were pictured out for a team-bonding meal yesterday evening.

New signing Harry Maguire joined his new teammates who headed to a Chinese restaurant ahead of the new season.

Marcos Rojo was not seen, and the Daily Mail claim that the Argentine was left fuming after not securing a deadline day move to Everton.

The Reds face Chelsea on Sunday in their opening Premier League game on Sunday and it is imperative Ole Gunnar Solskjaer’s men get off to a winning start.

There’s been a lot of negativity surrounding the lack of additions in key areas this summer, but United still have a capable squad with a host of promising youngsters coming through so there is still reason to be optimistic for fans ahead of the new campaign.

United’s attacking players, Marcus Rashford and Anthony Martial must step up this campaign following the exit of Romelu Lukaku; pressure will be on the pair to deliver in front of goal this season.

See photos of some of United’s stars below.

One Manchester United fan reminded us of just how much fashion has changed over the years, with a brilliant photo of Paul Scholes, Wayne Rooney, Rio Ferdinand, John O’Shea and Alan Smith with the interesting choices of attire!