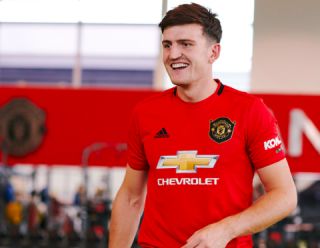 Manchester United manager Ole Gunnar Solskjaer has all but confirmed new signing Harry Maguire will start against Chelsea on Sunday.

The England centre-back turned out to be United’s final signing of the summer, arriving from Leicester City for a world-record £80m fee (BBC).

Solskjaer desperately needed a centre-back during the transfer window and has so far liked what he’s seen from the 26-year-old.

“Harry has impressed me, very much so,” ManUtd.com Solskjaer told MUTV as quoted by .

The Norwegian also hinted that Maguire will make his debut against Chelsea at Old Trafford.

“Harry is ready to play. I am sure he will put himself up, when I ask him on Sunday morning, if he is available, because he has played many games for Leicester over the pre-season. He has trained well and he has looked sharp when he has been here,” he added.

It will be interesting to see how Maguire slots into United’s side, presumably alongside Victor Lindelof in what is a promising centre-back pairing.

After conceding 54 goals last season, the most of anyone in the top 10, the defence needed addressing and Maguire should provide some stability with his commanding presence at the back.

“Paul joined in, actually, the day after [the AC Milan match]. I wasn’t going to risk him, travelling down with the flight, but he joined in the game against Blackburn the day after, behind closed doors here. He is available. All of the boys are fit. It was always our aim to get to the starting line with as many players as fit as possible. Of course, Eric’s injury is bad news but the rest of them are available.”

It’s encouraging to hear the United boss has a full squad to select from in what is undoubtedly a tough opening fixture against Frank Lampard’s Chelsea.

We are also likely to see a debut for another new signing, Aaron Wan-Bissaka, who has already excited fans with his performances in pre-season.