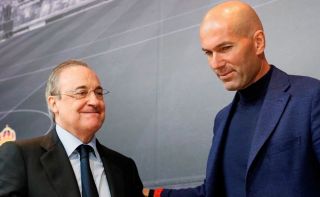 Zinedine Zidane made his transfer plans clear to Florentino Perez upon returning to Real Madrid as manager, with Paul Pogba listed as a prime target for the Frenchman to build his team around.

Now Zidane is said to be far from happy with his club president for the lack of movement.

The Daily Mail suggest Zidane is annoyed that R. Madrid have been unable to secure a deal for one of his top transfer targets, after already signing Eden Hazard from Chelsea earlier this summer.

United are under no pressure to sell Pogba — as has been the case throughout the summer – and it would be ridiculous to sell him this late into the window without a replacement.

Ole Gunnar Solskjaer is set to go an entire transfer window without signing a midfielder when United have lost two over the past six months, with Marouane Fellaini moving to China and Ander Herrera now playing for Paris Saint-Germain.

It doesn’t bode well for the upcoming season that Solskjaer’s midfield is weaker than it was when the disappointing 2018/19 season finished.

There’s a lot of talk about Scott McTominay being a more regular starter which I welcome, but the prospect of seeing Nemanja Matic and Fred fill me with constant worry. The Serb is finished and Fred… well, he’s better as club mascot!