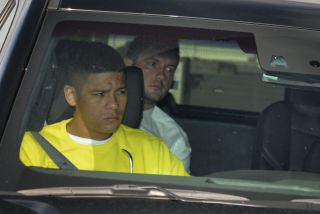 Marcos Rojo has left Carrington training ground for Everton to complete a £25m transfer on deadline day, according to reports.

Ole Gunnar Solskjaer appears to be ready to let he Argentina international leave the club as he has fallen further down the pecking order at Old Trafford following the £80m arrival of Harry Maguire.

Rojo is behind Maguire, Victor Lindelof, Chris Smalling, Phil Jones and Axel Tuanzebe as centre-back options at Manchester United – he needs to move for game time.

He was pictured at Carrington when the players arrived for training this morning, as per Manchester Evening News.

The Toffees are set to sign Rojo for £25m, according to talkSPORT, with the transfer being discussed on air by Jim White.

.@talksport understands #MUFC defender Marcos Rojo is on his way to the #EFC training ground ahead of a £25m move. More on the @JimWhite show.

The defender, who can play at centre-back and full-back, has been unlucky with injuries but sometimes he doesn’t help himself by taking opponents for short-cuts. Rojo has often risked his own well-being when flying into challenges.

There’s a quality fighting element to his game, but he’s just not a good enough defender for United. And I doubt he’ll even be a good buy for Everton…

Time will tell should a deal go true. If it does, we wish him the best.