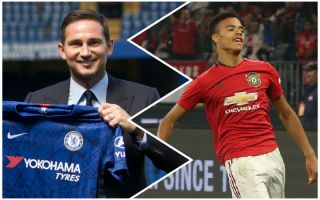 Plenty of focus will be on Chelsea’s new manager Frank Lampard, who returns to Stamford Bridge after representing the club as a player for most of his career. Ole Gunnar Solskjaer, on the other hand, knows United will always be at the centre of attention.

The blues clinched fourth spot in the league last season, even though Maurizio Sarri went through a terrible period during the season and ended up losing his job at the end of the season. Tensions were high and it was clear for some time the Italian didn’t see eye-to-eye with club owner Roman Abramovich.

It will be interested to see how Lampard does in his first season as a manager in the Premier League. His Derby County side did well last term, reaching the playoffs and losing the final to Aston Villa.

Chelsea haven’t been able to strengthen this summer due to a transfer ban and go into the new season after seeing their best player to Real Madrid. The sale of Eden Hazard had been coming but it’s an additional blow for Lampard to lose him without being permitted to sign a replacement of some sort.

United are without Ivorian centre-back Eric Bailly, who has been ruled out until Christmas. Harry Maguire could start following his £80m transfer from Leicester City earlier this week.

Paul Pogba missed the last pre-season friendly match of the 2019 tour with a back injury but will likely play, while Mason Greenwood was left out of the U23s squad which beat Rotherham 2-0 during the week, hinting the youngster could be involved to face Chelsea!

The Red Devils haven’t lost in their last three against the Londoners. However, it was Chelsea who came out on top when it came to defeating José Mourinho’s side 1-0 in the 2018 FA Cup final, which proved to be Antonio Conte’s last game in charge.

Solskjaer’s men also had an impressive pre-season tour after going undefeated but we already know these results won’t directly correlate to performances in the Premier League.

Chelsea had a good pre-season too, dispatching Barcelona in the process. They need to tighten up at the back if the friendlies this summer taught us something, or else Marcus Rashford and Anthony Martial will have a field day.

This will be a cracking game and we fancy United to edge it!