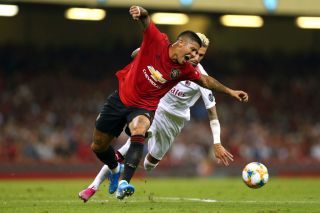 It is thought Ole Gunnar Solskjaer is open to selling a central defender following the arrival of Harry Maguire, and it looks like Marcos Rojo is the most likely to leave.

United have already rejected an approach from Everton for Chris Smalling, but could look to offload Rojo if a tempting offer comes in today.

Rojo is not expected to feature often this season as it is, with the arrival of Maguire as well as Axel Tuanzebe’s rise to prominence after spending last year on loan at Aston Villa.

Rob Dawson of ESPN states on Twitter, as seen below, that Everton are one of a few clubs interested in signing Rojo, while United are also open to offers for Italian full-back Matteo Darmian.

Darmian has been idle at United for some time and, in fairness to him, you never hear him complain or kick up a fuss.

Everton one of a few clubs interested in signing Marcos Rojo today. United also open to offers for Matteo Darmian but can sell to a foreign club until Sep. 2.

The transfer deadline for English clubs is today, although foreign clubs will be active until September 2.