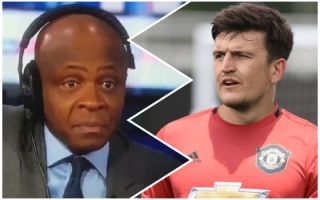 The 26-year-old agreed on a six-year contract at Old Trafford, with the option of a future year.

Signing for a deal worth £80m – a world record fee for a defender – Maguire eclipses the £75m Liverpool paid Southampton for Virgil van Dijk in 2018, as per BBC Sport.

Parker is one who doesn’t agree with United for paying £80m for Maguire.

“United have addressed a situation that the fans have been screaming for,” the former United right-back told Eurosport. “They’ve been saying that their centre-halves are rubbish, which was implanted in people’s heads by Jose Mourinho.

“The best way to shut the fans up is to go and spend £80m on a defender who everyone knows is not worth that money.

“The hope is that Harry Maguire can have the same impact that Virgil van Dijk has had at Liverpool, but you rarely get two bangs out of a stick of dynamite. I really don’t see how Maguire is going to come out and play in the same vein as Van Dijk. They’re hoping that he can make the defence better, but there’s a massive amount of pressure on him.”

Interestingly, Parker offered no alternative option for Ole Gunnar Solskjaer to pick from…

The manager made Maguire his prime defensive target for the summer and had to pay over the odds for his signature.

But nobody will mention the transfer fee if Maguire goes on to be a success at Old Trafford.

The same way they all forgot about Rio Ferdinand breaking the record for most expensive defender when he joined United.