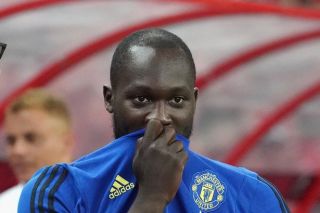 Even though it looks unlikely for United to sign a replacement this late, it would be a big surprise if Lukaku was to play for the club again, meaning a move to Italy is still on the cards for the striker.

Lukaku skipped training on Tuesday without permission from the club and for a second day running he trained with former club Anderlecht.

READ MORE: Deal off: Man Utd call a halt to talks with Eriksen as he prefers move to Spain

As reported by the BBC’s Simon Stone, there’s a good chance United will fine Lukaku for missing work yesterday.

As reported elsewhere, Lukaku can expect to be fined for missing training @ManUtd yesterday.

However, as revealed by Crafton, Lukaku’s problems root deeper than being pushed down the pecking order under Ole Gunnar Solskjaer, which is said to be the main reason for him wanting to leave Old Trafford this summer.

Lukaku now has some personal issues back in Manchester after reportedly falling out with Paul Pogba.

Crafton wrote: “Lukaku has since ruptured relations with [Mino] Raiola while there is also truth in reports of a drastic deterioration in his relationship with Pogba.

The pair exchanged words last season and Lukaku is also baffled by the way Pogba’s pre-season hints at a transfer have been indulged by Solskjaer.

By contrast, Lukaku believes his own professionalism has only cost him precious time in pre-season training with a new club.

Though it is worth noting that Inter Milan, who have shown keen interest in Lukaku this summer, have not met United’s transfer demands – so it’s a matter of his current club playing hard ball in negotiations. They have their valuation and he will remain a United player until that is met.

Moreover, United had been strongly linked with a move for Tottenham’s Christian Eriksen. Now the Red Devils have called a halt to talks over a potential transfer, with the Denmark international preferring a move to Spain.

Man Utd have called a halt to talks over potential transfer of Christian Eriksen because they think if he does leave Spurs, he would prefer move to Spain. Utd still in talks with other targets, although so close to deadline, chances of getting any deals done is not high.