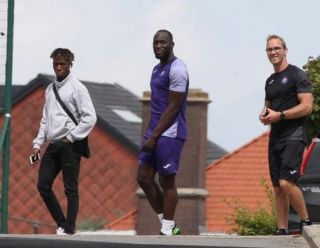 Romelu Lukaku is edging closer to a Manchester United exit.

The Belgium international has been unsettled at Old Trafford ever since learning Ole Gunnar Solskjaer prefers Marcus Rashford as his central piece in attack.

Lukaku is a lot more proven than Rashford, especially when it comes to scoring goals, but he just doesn’t suit the Norwegian’s style of play and his hold up play doesn’t bring wide players into the game as much as we need – instead he’d rather wingers supplied him with the service and that hasn’t quite happened enough.

READ MORE: What Man Utd must do if latest Inter bid for Lukaku is accepted

It’s a shame that he will leave the club under a grey cloud after going AWOL and refusing to turn up to training the past two days. According to the Daily Mail, United have fined the striker £400,000 as a result.

But the latest on Lukaku suggests that a move to Inter has intensified following the Serie A club’s latest offer.

Kristof Terreur claims “Man is on his way to Inter,” in a recent tweet, as seen below:

Man on his way to Inter. Third club outfit he will be wearing in less than a week. Antonio Conte gets the striker he wanted. #mufc ⚫️🔵 pic.twitter.com/yAPneCXyG5

Terreur is extremely reliable when it comes to transfers concerning players from the Belgium national team.

He’s also one of the hacks we’ve been following closely throughout the saga knowing he’s usually on the money.

Since Lukaku went AWOL, I can’t say I’ll be arsed about him leaving the club but we really should try to get a replacement in on deadline day. NOT Fernando Llorente!