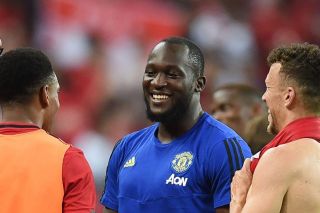 Manchester United will fine Romelu Lukaku for missing training, according to ESPN.

The Belgian striker trained with former club Anderlecht on Monday and Tuesday as he continues to engineer a move away from Old Trafford.

By training with Anderlecht, Lukaku ensures that everyone knows he’s desperate to leave the club and it’s a blatant attempt to send disharmony United’s way. He’s also trying to train ahead a move, so he’s not miles behind when he does join someone else ahead of the new season.

It raises questions about his professionalism and it’s thoroughly disappointing for a fan to see.

Lukaku had a decent first season at United and he scored plenty of goals. It was clear the finished article wasn’t there, he had lots to work on and then the follow up season was a disaster.

Ole Gunnar Solskjaer coming in and making it clear he wanted to work with Marcus Rashford more as his central piece threw Lukaku’s future up in the air, but the way he’s behaving resembles nothing but a spoilt brat.

In order for Lukaku to leave United this summer, an interested club must meet their transfer demands. It’s as simple as that.