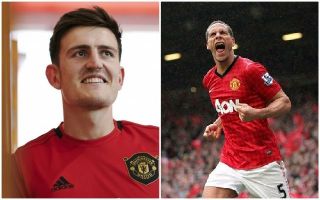 Manchester United confirm Harry Maguire will wear the no.5 shirt this season.

The defender was announced as United’s third signing of the summer on Monday, joining the club from Premier League side Leicester City.

Daniel James arrived earlier in the summer from Championship outfit Swansea City, while United also got one of their key targets Aaron Wan-Bissaka from Crystal Palace.

Manager Ole Gunnar Solskjaer needed a top defensive signing to sure up his defence, and with the additions of Maguire and Wan-Bissaka we look a look stronger at back.

Maguire wore the no.15 shirt during his two-year spell at the King Power Stadium.

He wore no.5 at former clubs Hull City and Sheffield United, but now he joins a list of top United centre-backs to wear the shirt, including Rio Ferdinand who sung Maguire’s praise on Instagram this week, as seen below.

Most Expensive Defender Of All Time… Harry Maguire signs for @manchesterunited for £80mill… funny enough we’ve both been there! Is there pressure? Yes.. is there expectation from across the world? Definitely… Are all eyes on Me? 100%… Will Your teammates be expecting big things? Of course…. Will people be expecting a massive change in the teams fortune? Most Definitely… These were the feelings, questions that were surrounding me when signing for the great club Manchester United. Being a CB, I have took a keen interest In Harry Maguire’s game since being linked with #MUFC under Moyes. He has made huge strides in the right direction & improved in all areas of his game. He’s grown into someone who can lead & be a leader of men… and shown at both ends of the pitch he can be effective. He has composure, willingness on the ball as well as the ability to drive out from the defence which I feel is as good as anyone in the game right now. Does he have things to work on… ofcourse like everyone else! After speaking to numerous people that know him, they all say what a level headed, hard working lad he is who will give 110% for his team which he echoed when signing. I think something #MUFC have needed defensively in recent years is a big character who can take on the responsibility of leading from the back & from what I’ve heard from people who know him well, they are confident that he will bring that to this football club. I would like to wish him well in the no5 shirt of @manchesterunited and hope he can help bring back success to our club. Good Luck @harrymaguire93 👊🏽⚽️

The no.5 shirt has also been worn by Marcos Rojo, Laurent Blanc, Ronny Johnsen and Lee Sharpe — with the latter being the first player to permanently hold the no.5 jersey, after squad numbers were introduced in the 1993/94 season.