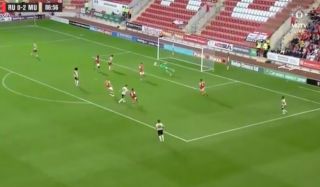 Manchester United’s youngsters came inches away from scoring an incredible team goal in the u21 EFL trophy game against Rotherham tonight.

Quinton Fortune and Neil Wood’s men secured a comfortable 2-0 victory thanks to goals from Ethan Laird and Largie Ramazani.

It’s a fantastic result for the youngsters, beating League 1 opposition in their first time playing the competition.

One of the highlights of the game came through a fast team move in which the Reds ended up hitting the post. It was a move reminiscent of the Reds attacking style under Sir Alex Ferguson, turning defence into attack in a matter of moments.

Fortune and Wood seem to have the United youngsters playing in an exciting style which is fantastic news for fans.

First-team prospects Angel Gomes and Tahith Chong both featured tonight but Mason Greenwood was not selected as he prepares for Sunday’s Premier League opener against Chelsea.

Jesse Lingard enjoyed it too🔥 pic.twitter.com/PvYLZYsjyT