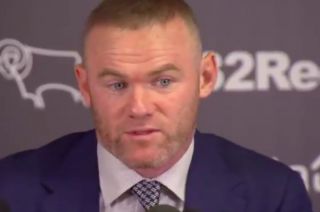 This is surely the most surprising transfer of the summer.

Wayne Rooney has joined Championship side Derby County in a player-coach role where he will join up with new boss Philip Cocu in the winter when the MLS season finishes.

It will be exciting to see Rooney play in the second division, as he is still putting away the goals for DC United in America.

United’s top goalscorer will undoubtedly be the most technically gifted player in the league, albeit lacking the pace he once had when in his prime at Old Trafford.

Rooney has often spoke about going into management when he retires, so this seems like the perfect platform for Rooney to progress into his desired future role.

In the video below, Rooney explains how this opportunity was too good to turn down amid a host of offers from other clubs.

Derby turned out to be the perfect stepping stone for Frank Lampard to get his dream move to Chelsea, so who knows where Rooney’s managerial career could take him.

We wish Wayne all the best in his new move.

"There were other clubs who were making offers and enquiring." 👀

Wayne Rooney says the opportunity to work with Phillip Cocu was too good to turn down when looking at his next move. 🐏 pic.twitter.com/jT3PoudeMr