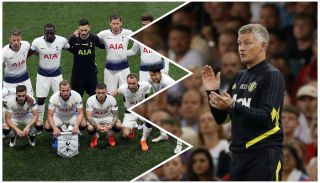 In a shock move, Manchester United are said to be pursuing a deal for Tottenham playmaker Christian Eriksen in the final 48 hours of the transfer window.

That’s according to ESPN’s Rob Dawson, who believes United are interested in the Dane but that a transfer will be difficult to pull off with Thursday’s deadline so near.

Let’s face it, United have been slow at getting deals over the line this summer, with Harry Maguire announced as the latest signing on Monday following a summer long saga.

Spurs chairman Daniel Levy is also renowned for being a tough negotiator and will smell blood if United come knocking, unless he is willing to compromise on the £130m price tag they reportedly put on Eriksen.

United will have to pay £60m if they want to sign Christian Eriksen. #mufc [AS]

He has one year remaining on his contract at White Hart Lane and transfer speculation can easily give the impression Spurs are trying to find a younger alternative or replacement for the Denmark international.

Ole Gunnar Solskjaer would be signing a player already Premier League proven, who has warranted links to some of the biggest clubs in the world in the past, such as Real Madrid. He also needs to bolster his midfield after losing Marouane Fellaini and Ander Herrera in the last six months, without signing a single midfielder to replace them.