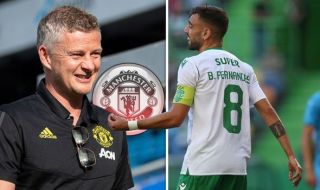 There has been Bruno Fernandes to Manchester United links all summer.

Every day without fail you’d find something new on the Sporting Lisbon playmaker, who has also attracted interest from Tottenham Hotspur and Liverpool.

Although United have been closely linked to Fernandes all summer, they don’t appear any closer to signing than they were a month ago, and the transfer window shuts for all English clubs on Thursday at 5pm.

The Red Devils are running out of time to sign Fernandes, but Record add fuel to the fire by claiming United have offered more than the €60m offered by Spurs yet have still to reach the €70m Sporting are demanding.

The report doesn’t say it’s a formal offer, though it’s enough to suggest United are now involved in bidding for the playmaker.

They state ‘the next few hours are decisive’ and there’s a growing belief Jorge Mendes will try persuade United to make a move before the transfer deadline.

It would be disappointing to lose out on Fernandes, or to see him join Spurs before Thursday.

Signing him, however, would give everyone a big boost ahead of the new season. It could make our transfer window a success one.