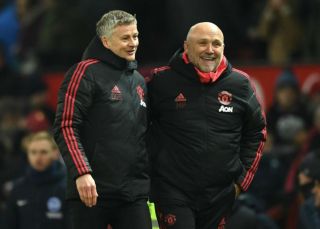 Phelan’s say would carry more weight than others around Old Trafford considering he is back now after being Sir Alex Ferguson’s right-hand man for a number of years before leaving after the Scot’s retirement in 2013.

He went on to have spells at Norwich and Hull City – and the latter being where he managed Robertson, as well as United’s latest signing Harry Maguire.

And The Athletic report that, after leaving Hull, Phelan was contacted by United chiefs over whether any players were worthy of being pursued by the Red Devils.

It is claimed that he tipped Maguire, but that he also recommended Robertson.

United didn’t move for either player after Hull decided to sack Phelan in January 2017, although both players left the club the following summer. Robertson joined Liverpool, with Maguire moving to Leicester City, who he’s just left for Old Trafford two years later.

Maguire has signed a six-year deal at Unite after joining for a world-record £80m transfer fee. Speaking about working with Phelan, the England international said, as quoted by The Express: “He’s got great experience and I had a really good relationship with Mike.

“I’m really excited to be working with him again, he’s a top coach, he’s helped me through my years and I’ve always been in contact with him so it’s good that I get the chance to work with him again.

“From my conversations with the manager, I am excited about the vision and plans he has for the team.

“It’s clear to see that Ole is building his team to win trophies.

“I think you’ve seen the players that we’ve brought in already this year.

“You can see they’re trying to build and improve on last season and I’m sure we’ll do that.

“I am now looking forward to meeting my new team-mates and getting the season started.”

The relationship Maguire and Phelan built during their time at Hull should mean he’ll find it easier to settle at United.

United get their Premier League season underway this weekend against Chelsea.