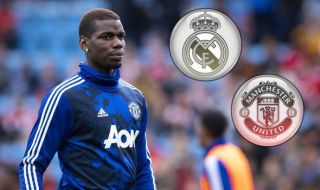 Paul Pogba’s future remains up in the air as ESPN claim Manchester United will consider a bid of £180m for the France midfielder.

It’s far from ideal not knowing whether you’ll have your best player at the start of the season, but it’s still possible that Pogba will leave Old Trafford before Thursday’s deadline.

It’s unlikely because it doesn’t sound like Real Madrid have the funds to sign Pogba this summer following their laughable offer consisting of Colombia international James Rodriquez and £27.4m, which according to talkSPORT was rejected by United.

While United could still lose Pogba after August 8, English clubs will no longer be permitted to make transfers past that date due to the transfer window closing earlier than, say, La Liga and Serie A.

That puts English clubs at a blatant disadvantage — all transfer windows should be one for the biggest leagues in Europe, opening and closing at the same time.

It’s important to note that United are not actively trying to sell Pogba, even though there are so many signs that he would like to leave this summer, but instead they’ve named their price knowing Real Madrid are unlikely to meet their demands.

A return to Juventus now looks dead in the water. At least for this summer.