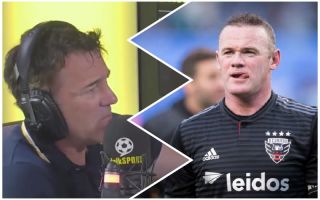 Dean Saunders thinks a fit and hungry Wayne Rooney is the sort of player Liverpool need after winning the Champions League in June.

It’s a bizarre statement knowing Rooney’s dislike for LFC and that he’s coming to the end of his career in the MLS.

There’s no way the former England international would be up to Premier League standard, as seen after his return to Everton in 2017, and to think he’d play for Liverpool is just crazy.

Saunders goes on a mad one. Even Alan Brazil is in disbelief, as seen in the video below:

Dean: “They need a player who can turn defence into attack.” 👍

Dean Saunders is sure Rooney can still cut it in the Premier League and even thinks #LFC would be a good fit! pic.twitter.com/MTh4zJMDh2

In other news, Telegraph Sport revealed on Monday that Rooney is poised to make a sensational return to English football in a player-coach role with Derby County, working under Phillip Cocu.

Mel Morris, the owner of Derby County, has confirmed Rooney is on the brink of joining the Championship club in a move, obviously with the full backing of Cocu.